We have been dealing in katsuobushi (dried bonito) and dashi (soup stock) since our company's establishment in 1699. In particular, our business has expanded chiefly focused on hongare katsuobushi, which has mold applied at least 4 times, and is aged over a period of half a year.
For over 300 years, we have worked in Japanese food culture, which itself developed over many centuries, fostered by four seasons and rich sea and land, blessed by both climate and custom. Dashi, including that made with katsuobushi, can be considered the foundation of Japanese cuisine, contributing its underlying flavor. Although dashi contains almost no calories, it adds flavor to dishes and is highly satisfying. It also contributes to the realization of a well-balanced diet. Dashi is an essential component of Japanese cuisine, which is renowned as one of the world's healthiest. In 2013, Japan's culinary traditions gained formal recognition when “washoku” (traditional Japanese cuisine) was designated by UNESCO as an intangible cultural heritage. Presently, Japanese food is attracting worldwide attention, however it seems that Japanese people themselves have forgotten the merits of their own culinary traditions. In this context, I believe that reacquainting ourselves in Japan with the importance of food culture will create opportunities to communicate this with the rest of the world. This will also lead to the further evolution of Japanese cuisine. Japan's culinary culture has great future potential, and consequently there is also great promise in katsuobushi and dashi.
Our threefold mission is “perpetuation, creation, fusion.” We seek to perpetuate the genuine flavor of Japanese cuisine, developed over the centuries, to create new cuisine for the next generation and to engage in fusion, adapting to change to ensure the traditions are shared with many people. We will continue to tackle new endeavors, valuing communications with our customers, and sincerely dedicating ourselves to making safe and delicious products. We will strive to earn the trust of consumers, aiming for both evolution and permanence in the rapidly changing global environment. 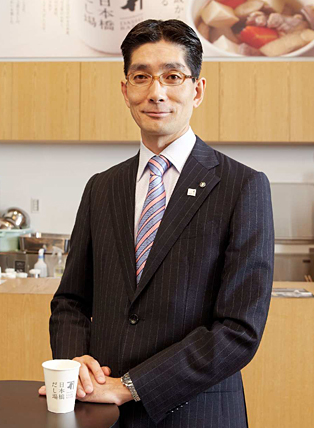