The founder of Ninben, Ihee Takatsu, was born in Yokkaichi, Sesyuu (in present day Mie Prefecture) in 1679. In 1691, he moved to Edo's Kobunacho and became the apprentice of a grain trader named Tarokichi Aburaya . When he was 20 years old in 1699, he then began trading in katsuobushi and shioboshi (salted and dried fish) at two side-by-side stalls in Dotegura of Yokkaichi, Nihonbashi, near the present day Nomura Securities head office in Nihonbashi 1-chome. That year is considered to be the year of Ninben's establishment.
Later on, in 1704, he opened a wholesale store in Kobunacho. In the following year, he changed his name to Ihee and the name of his shop to Iseya Ihee. He then started a retail store in Setomonocho, Nihonbashi (present day Muromachi 2-chome) in 1720, which is now the location of the current Ninben head office.

In 1705, the founder named his shop Iseya Ihee. To make the kane-ninben trademark, he combined a part of one character from his name and the name of the shop (イ) to form a right-angle gauge（T）, a symbol that means "doing business in an honorable way," as well as meaning money.

The idea of Mitsu-Kaneninben is something that has been passed down within the company for a very long time.

We place great importance on the idea that it is possible to do business only once a relationship of trust between these three groups is established. In terms of a sustainable society, this is also an idea that harmonizes with today's society.

In 1979, Ninben was awarded the Emperor's Prize at the 18th Agricultural, Forestry, and Fisheries Festival for the development the Katsobushi Fresh Pack, the open sharing of its production process, and creating an increase in demand for katsuobushi, and also for its contribution to the expansion of the industry and promotion of stable management in the bonito fishing industry. 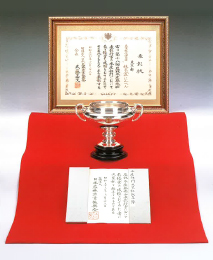